WHY I BELIEVE THE COUNTRY NEEDS BERNIE SANDERS!

Independent Vermont Senator Bernie Sanders recently declared he is a candidate for President next year, and will challenge front-runner former First Lady / Senator / Secretary of State Hillary Clinton for the Democratic Party’s nomination. I applaud this move for a number of reasons.

First and foremost, Bernie Sanders is GENUINE, and is NOT an overly ambitious, self-centered or vain glory seeker . He passionately believes in, and has fought his entire political career for, all the most important social environmental, and economic issues of our time, from civil rights to women’s rights to workers’ 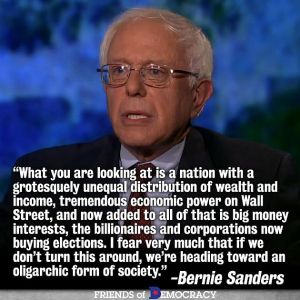 rights to rights for the poor to universal health care for all, to a prohibition on fracking, to opposition to unfair trade deals like NAFTA, CAFTA, and the TPP, plus much more. He has pledged to run a campaign based on ideas, issues, and policies, and will NOT run negative, personal campaign ads. Indeed, he has never relied on these scurrilous types of ads to make his point. His approach to campaigns has always been built on thoughtful logic and honest debate on the issues, and he is not about to start campaigning differently now.

That is not to say that Sanders will not very forcefully speak out against another’s ideas if he believes them to be wrong or harmful. During the recent

Senate debate over the ridiculous House Republican-sponsored budget, Sanders went to the Senate floor to  lambast that godawful plan. It would slash Medicare and Medicaid while giving $1 BILLION in new, undeserved, and wholly unnecessary tax breaks to the rich. Sanders said, “I am going to continue doing everything that I can to make sure that the budget that is finally passed here in the Senate is a fair budget, is a responsible budget, is a just budget.” He submitted some very sensible plans that would help balance the budget in a far more even-handed way and would not do so mainly on the backs of the middle class, workers, the elderly, and the poor. He insisted that the wealthy and large corporations pay their fair share in taxes, and agree to help reduce the deficit in a fair and responsible way. His plan called for these main points:

Now who can argue with such sound and pragmatic logic? Are not these the thoughts and beliefs of a man truly concerned with the well-being of the entire country rather than merely the greedy few who jealously guard the very top rungs of the economic ladder and stand in the path of progress for all? 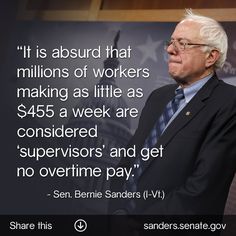 Aside from his refreshingly genuine sincerity, it is important to note that, as a true Independent, Bernie Sanders is beholden to NOBODY other than the American public. He owes no favors to anyone, and strongly opposes the efforts of billionaires like the Koch Brothers and Sheldon Adelson to buy-off politicians and receive favorable deregulation or other such legislation as a reward for their donations. I share his support for public financing of elections and also his belief  that we must get the money out of politics altogether. He and I both strongly oppose the Extreme Court’s very flawed 2010 Citizens United ruling, and we both strongly advocate the adoption of a new Constitutional Amendment stating emphatically that Corporations are NOT people and that Money is NOT Free Speech!

Cynics have argued that Bernie Sanders is as corrupt as many other Democrats and virtually all of today’s Republicans. They cite as evidence that he allowed President Obama to campaign for him during his 2008 campaign for re-election to the Senate, and that he has been very soft on Obama politically overall. I find these accusations to be utterly baseless. For one thing, Obama campaigned for him before being elected President and well before his closeness to Wall Street and the Military / Industrial Complex became evident, to the chagrin of most of us. For another, he has been a staunch critic of Obama’s support for trade deals like the TPP as well as his use of drones. He has always supported a Single Payer system for health care, and only very reluctantly supported the Affordable Care Act, regarding it as a mere stepping stone to a much better, universal health care system which he feels we will  certainly adopt in the future.  Like Elizabeth Warren, he has neen intensely critical of Wall Street and believes their excesses must come to a screeching halt. He has also been a long time supporter of the #Occupy movement.

Though an Independent (he refers to himself as a Democratic Socialist who believes we can learn from and adopt much of the successful social programs found in Denmark, Sweden, and Norway) Sanders has chosen to caucus with the Democrats during his terms in Congress. He finds he agrees with them more than he does with the Tea Party-infested reactionary Republicans. But 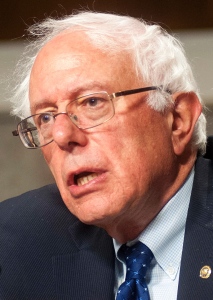 Bernie is definitely NOT a corporatist Democrat. He differs notably from Hillary Clinton in this regard. He decided to seek the Democratic Party endorsement for President as he did not wish to split the presidential vote three ways. This was a quite sensible move in that it showed he is quite aware of how poorly third party candidates have traditionally fared in presidential elections, and he definitely didn’t want to see a reactionary, government-hating Republican gain the White House. For, much like progressive New Dealers and traditional New Frontier and Great Society Democrats before him, Bernie Sanders believes in government and feels it has a duty to provide equally for all of its citizens.  But can he win the presidency? I wouldn’t automatically count him out – his entire political career he has been defeating both Democrats and Republicans. He gained an astounding 71% of the vote in his last Senate race (meaning that he even captured a significant amount of Republican votes in traditionally Democratic Vermont). Voters of all poltical persuasions recognize that  he is not advocating the abolition of private property or profit, and will not set up a “nanny state” or any of that nonsense, but he WILL restore the average citizen’s ability to influence and take part in their own government – something which has been sorely lacking in this modern, corporation – tainted era that has been strangling us ever since the days of that worthless Ronald Reagan in the 1980s.

The entrance of Bernie Sanders into this race is a good thing. A series of debates between he and Hillary Clinton will force our corporate-owned media to focus on important issues affecting the majority of the country instead of the silly cat-fighting and mudslinging the Republicans will engage in. It will be good for the country for a leftist to set the political and economic agenda for discussion rather than having the crazy Republicans always framing the arguments. That is why I firmly believe the country desperately needs Bernie Sanders! I would urge you to visit his website at https://berniesanders.com/ starting on May 26 and also Google him to find out his positions on various issues. Check him out at https://www.opensecrets,org/ to see where his money cpmes from. You will NOT be disappointed! 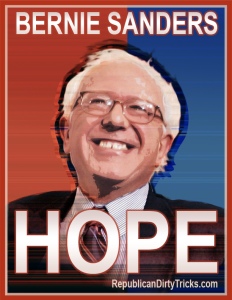 2 Responses to WHY I BELIEVE THE COUNTRY NEEDS BERNIE SANDERS!